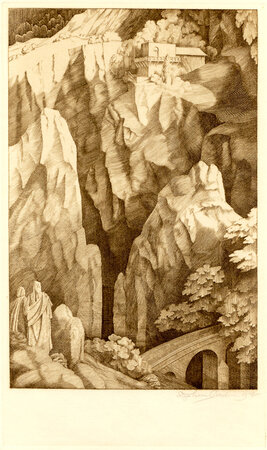 < >
With the full set of 12 signed proofs. Extremely rare.

Together with: A set of 12 proof copper engraved plates in a portfolio signed and dated 1927 and 1928 by Gooden on each plate. Large folio, in the original brown buckram portfolio lettered in gilt on the upper cover. All in fine condition.

In 1913 the important Irish author George Moore (1852-1933) journeyed to Jerusalem to research background for his novel The Brook Kerith. This book is based on the supposition that a non-divine Christ did not die on the cross but was nursed back to health and eventually travelled to India to learn wisdom which obviously embroiled Moore in considerable controversy.” Moore importance was huge. According to Richard Ellmann he heavily influenced Joyce and is often referred to as the first great modern Irish novelist.
Obviously of the greatest rarity and in extremely good condition.