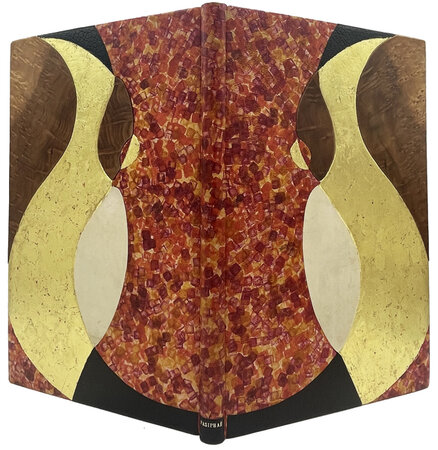 Nicky Oliver’s design notes read: Pasiphae: the immortal daughter of the sun god Helios, wife of King Minos of Crete. Legend has it that her husband displeased the god Poseidon. As and act of revenge, Poseidon cursed Pasiphae to fall madly in love with Minos’s prized white bull. To satisfy her lust for the creature she employed the services of the great craftsman Daedalus to create a wooden cow- so that she could be “coupled” with the beast. The result of which was the birth of Asterion, better known as The Minotaur.
The book when opened reveals Pasiphae’s torso entwined with large golden cow horns. The recessed wooden veneers and vellum represent the wooden cow.
Nicky Oliver is a fellow of the Designer Bookbinders, working from her Black Fox Bindery and is well known for her accomplished exploration of different materials and techniques. Her bindings are much sought after and her work is represented in several major private and public collection.