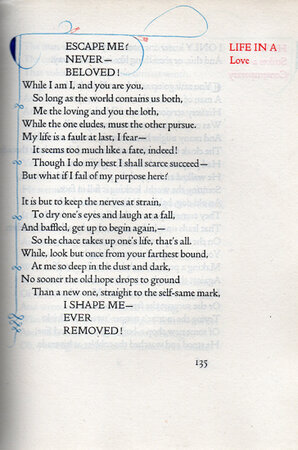 Flourished and with calligraphic inscriptions on the colophons by Edward Johnston

Two volumes. 200 flourishes by Edward Johnston in blue, green and red ink. Sm. 4to., original full limp vellum with gilt lettering to the spine. Few bits of browning to edges, particularly on vol II which as a tear to the last two blanks and some bubbling on the lower pastedown. Housed in a later slipcase.

Written by Edward Johnston in a fair hand on each colophon in red ink: “Flourished by Edward Johnston, June 1908 [1st volume] December., 1908 [2nd volume]. Each copy has a specific month - the one in the bibliography has May and November.
This was the last book in which Emery Walker’s name appeared.
Booklabels of Joseph Manuel Adreini and Francis Kettanah on front pastedowns.