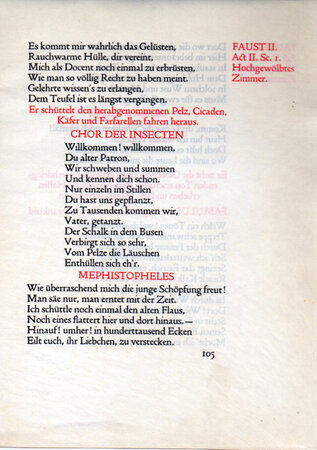 With an additional leaf printed on vellum

Two volumes. Vol I, one of 300 copies, Vol II, one of 250 copies. Printed in red and black. Initial letters by Edward Johnston and engraved W.H. Hooper and Eric Gill. 4to., original full limp vellum, gilt lettering on the spine. An extremely good, bright copy with an addition vellum leaf being pp. 105 and 106 from the second volume printed in red and black.

Cobden-Sanderson, the owner of the Doves Press, had studied German philosophy and greatly admired Goethe, almost as much as he admired Shakespeare. As Marianne Tidcombe points out, this is one of the most beautiful works from the Press: “Johnston’s four-line heading, in black, with the words DIE TRAGOEDIE standing alone on the page following the preliminaires, is especially fine”.