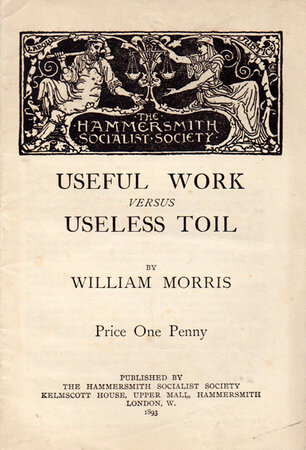 < >
Archive of Catterson Smith, artist, socialist, Driector of the Birmingham School of Art and collaborator with William Morris on Kelmscott Press books, particularly the Chaucer.

A remarkable small archive from the early days of British Socialism belonging to the Catterson-Smith family.

Included is:
1) Original membership card of the Socialist League, Hammersmith Branch for Mrs Catterson Smith in 1899, signed by William Morris and Emery Walker as Branch Secretary and Treasurer and showing her subs paid in January, initialled by Walker. With a design by Morris printed in sanguine on card.
2) 8pp. pamphlet “Statement of Principles of the Hammersmith Socialist Society”, published by the Society at Kelmscott House, dated 1890 and printed at the Cooperative Printing Society in Fleet Street. Rather spotted with fold where it must have gone into a pocket, sewn as issued, bit worn but a rare survival.
3) Nos 1 and 2 of the Hammersmith Socialist Library publications. 1) The Reward of Labour by William Morris pp.12 in the original stapled wrappers, very good, advertising the Society’s free Sunday lectures at Kelmscott House, 1892;; 2) What’s to Be Done? Agitate! Educate! Organise! by Andreas Scheu. Pp.12 in the original stapled wrappers, a little darkened and worn at the spine, 1892.
4) Kelmscott Press printed invitation for the Hammersmith Socialist Society for a lecture on Saturday, January 30th, 1892 at 8pm at Kelmscott House. Printed on the front of a 4 pp. folded piece of paper. 115 x 80 mms. Inside are pencil notes - apparently from the meeting.
5) ‘Useful Work versus Useless Toil’ by William Morris. Pp.20, pamphlet with design on upper cover, stapled as issued. Very good copy. Hammersmith Socialist Society, Kelmscott House, 1893.
Two items around the killing of Alfred Linnell in Trafalgar Square on November 20th 1887.
6) ‘A Death Song by William Morris’ with a memorial design by Walter Crane. 8pp. in the form of one very large folded sheet 4to, with 4 pages of printed music, words by William Morris, Music by W. Lawson. Bit worn and with some soiling on the outside pages. Sold for the benefit of Linnell’s orphans, published by Richard Lambert, 1888.
7)’Discretion, but No Surrender! Trafalgar Square with plan and illustrations. History of the Movement and correspondence between Sir William Harcourt and the Metropolitan Board of Works on the right of Public Meeting in Open Spaces’. Pp.12. With advertisement for the meeting at Trafalgar Square on June 1888 “The People will keep their temper and regain their rights” to public meeting. Spotted and a bitl soiled on the outside leaves, stapled as issuedPrinted for The Democrat, 1888.
8) Flyer for Hammersmith Socialist Society Lectures on Sunday Evenings at Kelmscott House for January to March 1896 including Chas Mallet on Experiments on Living Animals and the New Slavery, May Morris on ‘Patient Grisel’ and William Morris on ‘One Socialist Party’.
Also advertised are outdoor meetings on Sunday mornings at 11.30 at the foot of Hammersmith Bridge. Single broadside 220 x 141 mms. Spotted.
9) Broadside for the launching of the Independent Labour Party. 2pp. folded and on the inside a roneoed full spread membership form. In addition there are some notes by Catterson Smith about for cleaning up borders for Sigurd book for William Morris and the Venus Bough. Spotted. c. 1893.
10) Manuscript for an excellent speech on Socialism by Robert Catterson-Smith. 11pp. (incomplete, spotted with a little wear. It begins “For the benefit of those who are not socialists let me run over briefly our broad idea’.

Robert Catterson-Smith was a great friend and colleague of William Morris. He was an artist, socialist and principal of the Birmingham School of Art and Director of Art Education there. He worked with William Morris on his books, tidying up his artwork and was particularly involved with Morris and Burne-Jones in the production of the Kelmscott Press Chaucer.