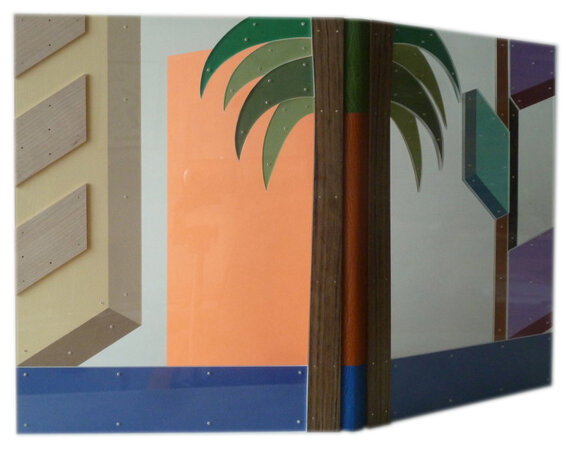 One of only 69 signed and numbered copies. 24 screen printed pages. 25 x 33 cms. In a superb large enginerred binding by the great British bookbinder Peter Jones of brown, tan and green morocco backed wooden and perspex boards with palm tree and signs design in various coloured pape applied to perspex sections. All housed in a superb wooden, orange felt lined box, perspex windows with original upper wrapper screen print on the upper cover. Original screen printed back wrappers in a pocket at the back.

The binding statement declares: Through my choice of materials, design and structure I sought to capture the essence of the scenes depicted within the book. The treatment of the spine and adjacent shapes are palm trees with the shapes at the fore-edges being stylised representations of signage, viewed from street level. The structure of the binding was devised to cope with the particular demands of a thick single section text block printed on heavy paper. The original covers of the edition binding have been incorporated into the box as the top of the lid.”
Peter Jones worked in London as a furniture restorer and leather liner before training in bookbinding at Brighton Polytechnic. He now works as a bookbinder and as a carpenter and his books have a remarkably engineered quality with a great understanding of how to use different material in his work. He has taught bookbinding extensively, including at the Universities of Brighton and Roehampton and is a Fellow and Past President of Designer Bookbinders. His work is exhibited internationally and held in numerous collections. Peter mainly works from his studio bindery in Wannock, East Sussex.