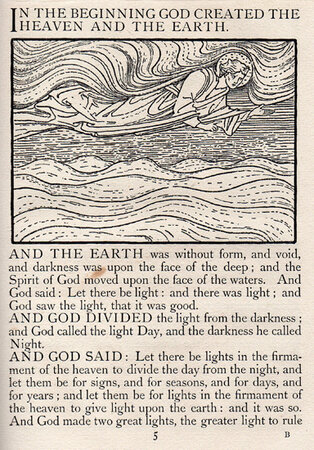 BURNE-JONES, Edward. ~ The Beginning of the World.

25 pictures by Burne-Jones for ‘Biblia Innocentium’ reproduced from the original drawings with the help of Robert Catterson-Smith who worked with Burne-Jones and Morris on the Kelmscott Chaucer. Large 4to., original printed paper covered boards, our copy with pigskin spine and corners and gilt lettering on the spine, probably later than the original linen back rather than a variant but it is a definite aesthetic improvement. A handsome copy.

With an introduction by Georgiana Burne-Jones which describes how these 25 pictures were designed for an illustrated edition of Mackail’s Biblia Innocentium which was to have been printed at the Kelmscott Press. They were not used and some were not quite finished. She sought the help of Catterson Smith to translate the pencil designs into ink, as he had done with the Chaucer, so engravings could be produced.