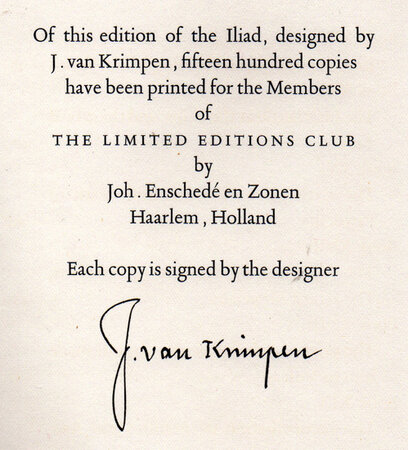 LIMITED EDITIONS CLUB. ENSCHEDE. POPE, Alexander. ~ The Iliad of Homer. Translated by Alexander Pope with the introduction by Mr. Pope.

Signed by the great Dutch typographer Jan van Krimpen who designed this book and oversaw its printing at Joh. Enschedé in Holland. One of 1500 copies. 4to., original full red linen binding, in the original yellow card slipcase. A couple of tiny chips to the top of the spine which is a little creased, otherwise good, there is wear to the slipcase.

The Iliad and the Odyssey which van Krimpen designed for the Limited Editions Club are notable examples of his restrained style. They were beautifully printed at Joh. Enschedé en Zonen and the Iliad was the first time van Krimpen’s beautiful Romanée type was used in an American book. Van Krimpen decided to use Van Dijk italic for the introduction and this book certainly adhere’s to the great designer’s theory that “everything that counts in typography is subtlety”.