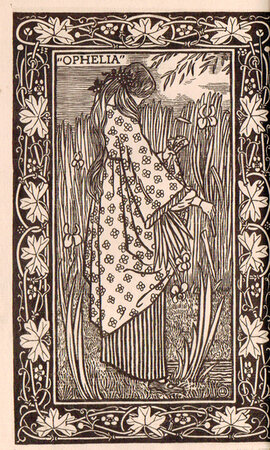 Frontispieces, double borders and 14 initials wood engraved by Lucien and Esther Pissarro. Each volume one of 220 copies printed in Vale type in red and black on handmade paper. 8vo., quarter bound in grey paper with title in gilt on upper left hand corners and on the spines, green and cream wood sorrel patterned paper covered boards. Some darkening to paper on boards and endpapers, and mild bumping to top and bottom of spine otherwise very good.

Volume II has an ownership inscription by T. Balston dated August 1922 with the added note “Gift from Lucien Pissarro”. Volume I has the very small booksellers’ tickets of A.B. Nordkompaniet in Stockholm and Deighton Bell in Cambridge.
T. Balston was presumably Thomas Balston from the Balston papermaking family who was a director of Duckworth the publisher and a scholar of English book production and illustration who was particularly interested in wood engraving producing books like ‘English wood engraving 1900-1950’ and most famously ‘The Wood Engravings of Robert Gibbings’ in 1949.
Laforgue’s stories include Hamlet, Pan and the Syrinx, Salome and Lohengrin.