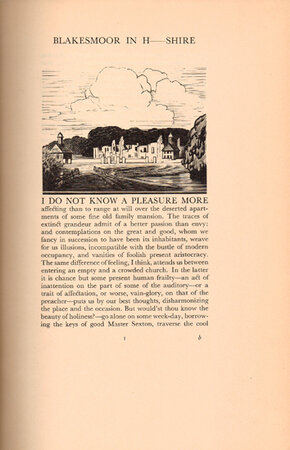 One of only 25 special copies

Two volumes. 2 wood engraved frontispieces and 27 wood engraved headpieces adapted from contemporary prints by H.W. Bray. No. 8 of 25 special copies. Printed in Baskerville type on Japanese vellum. 8vo., bound in full brown morocco by George Fisher at the Gregynog Bindery, gilt lettering on spine, ruling in blind, top edges gilt, others uncut. Some darkening to the morocco and small marks to spines, otherwise a good set.

This copy signed by Thomas Jones and Gwendoline Davies of the Gregynog Press.
A collection of essays by Lamb who is the Elia of the title. They were personal and conversational and were a huge hit in the 1820s when they appeared in The London Magazine. The wood engravings are generally considered to be among the best work by Bray and in 1931 the First Edition Club selected this to as one of the 50 Best Books of 1931.