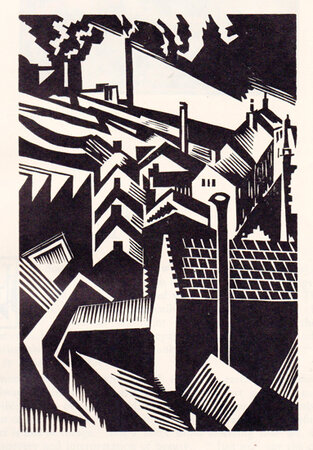 With an introduction by Arnold Bennett. No. 20 of only 50 copies on japanese vellum, signed and with an original unique woodcut ‘Black Country Village’ (“now destroyed”) by Wadsworth. 20 plates being collotypes of drawings by Edward Wadsworth, with woodcut headpiece and tailpiece, both printed over in red, and woodcut initial and press device also by the artist. Folio, original full black cloth with title blocked in gilt on upper cover. Some rubbing and a little wear and marks to cloth but generally a very good copy of a rare item.

The introduction by Arnold Bennett is reprinted from the Leicester Galleries catalogue which was printed for the January 1920 exhibition of this work. At the end are 3 pages of reproductions of press notices for the exhibition.
Wadsworth had become part of the Vorticist group before World War One and this group of drawings which are a graphic presentation of industrialism pursue the group’s aim to reflect the mechanical and technological changes which affected twentieth century society.