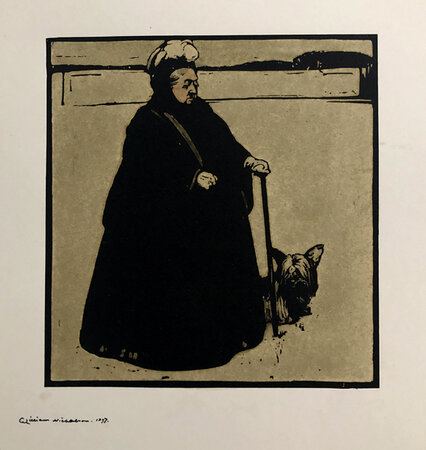 < >
One of the very rare deluxe sets of hand coloured woodcuts

Deluxe edition (there were around 40 copies) of 12 hand coloured woodcut portraits all signed, numbered and dated by William Nicholson in ink, between 1897 and 1899. Large square folio, all loose as issued in the original white cloth portfolio with a loose title page and index. The original silk tie is missing and the paper foldins have the occasional tear, some spotting to the prints but at the edges of the card, far from the images and signatures.

The famous portraits are of Queen Victoria, Edward, Prince of Wales, Prince Bismarck, William Gladstone, the Archbishop of Canterbury, Lord Roberts, Cecil Rhodes, Sir Henry Hawkins, James McNeill Whistler, Rudyard Kipling, Sir Henry Irving and Sarah Bernhardt.
With the publisher William Heinemann, Nicholson published 5 illustrated works: An Alphabet, An Almanac of Twelve Sports, Twelve Portraits, London Types and The Square Book of Animals. Each book comprised series of lithographs after the original woodblocks cut by Nicholson but there had deluxe copies, as here, which were loose prints from the original blocks and hand coloured, each signed by the artist.
His portrait of Queen Victoria which is the first in this set was one of the most famous British prints ever made. The portraits were a great success and many critics believed this was his greatest work, earning him a gold medal at the Exposition Universelle in Paris in 1900.