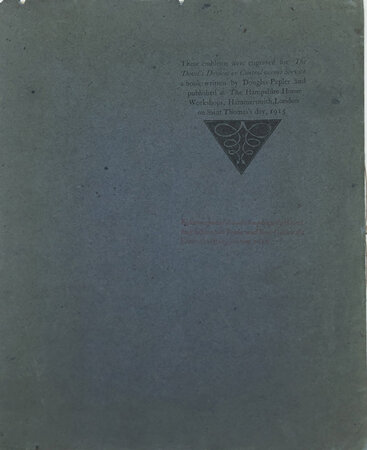 No. 14 of only 15 copies printed on japanese paper on rectos only. First edition (a second edition appeared in the same month in brown paper wrappers and was limited to 33 copies). Wood engraved title page with device enclosing the initials of Pepler and Eric Gill and the date and signed by Gill in pencil. 260 x 325 mms. 4to., original blue wrappers printed in red and black. Wrappers very slightly soiled and spotted, internally in superb condition. Housed in a handsome quarter blue morocco box.

An astonishingly rare survival. The colophon declares that “These emblems were engraved for The Devil’s Devices or Control versus Service, a book written by Douglas Pepler and published at The Hampshire House Workshops, Hammersmith, London on Saint Thomas’s day, 1915.”

3 copies of this edition in WorldCat at the Universtiy of Victoria, Stanford and the University of Melbourne. Eric Gill: A Bibliography 260
Stock ref: 9842
Keywords: Book, Illustrated
Print this page View basket Price: £10,000.00