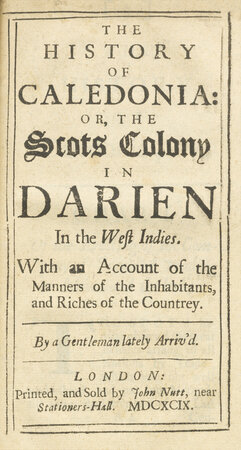 DARIEN COLONY. ~ The History of Caledonia: or, the Scots Colony in Darien in the West Indies. With an Account of the Manners of the Inhabitants, and Riches of the Countrey. By a Gentleman lately arrived.

Pp. 54. 4to. in half sheets, without the final blank leaf. London, printed and sold by John Nutt, 1699. Together with:
2. [FOYER (Archibald)]. A Defence of the Scots Settlement At Darien. With an Answer to the Spanish Memorial against it. And Arguments to prove that it is the Interest of England to join with the Scots, and protect it. To which is added, A Description of the Country, and a particular Account of the Scots Colony. Pp. [8], 86. 8vo. The dedication to the King is signed ‘Philo Caldedon’. Edinburgh, 1699.
and:
3. [HODGES (James)]. A Defence of the Scots abdicating Darien: Including an Answer to the Defence of the Scots Settlement there. Authore Britanno sed Danensi. Pp. [20], 1-60, 145-168. 8vo., title-page mounted on a guard, top edge strengthened; text browned. The dedication to directors of the Scots' African and Indian Company is signed ‘Phil. Scot.’[Edinburgh?]: Printed in the Year, 1700.
All bound together in late 19th-century red quarter morocco, red cloth sides, slightly rubbed.

In 1695 the Scottish Parliament passed an Act which gave authority to the new ‘Company of Scotland Trading to Africa and the Indies’ to set up a trading station on the isthmus connecting South and Central America [now Panama]. It was given immunity from customs for twenty years and an assurance that any ships damaged or lost would be paid for at ‘His Majesties Charge’. Thus the Company of Scotland would be able to undersell its competitors and was effectively underwritten by the King, who was not best pleased at this presumption of the Scottish Parliament. Unsurprisingly the idea became immensely popular and large sums were quickly raised from subscriptions. The project was overseen by the important economist William Paterson, then at the height of his powers and fame.
On 28th July 1698 the pioneer settlers set sail from Leith, their departure cheered on by a population whose imagination had been fired by mercantile rivalry with English trade. The first few weeks went very well, few died on the voyage out, and an easily defensible spot with a good harbour was found. However the community was soon beset with sickness, anarchy and a severe shortage of supplies. In 1699 rules and ordinances were drawn up for the colony including a simple criminal code with trial by a jury of fifteen, a judicature, but no civil code. The problems were further exacerbated by fervent Protestantism promulgated by the ministers appointed to look after the spiritual welfare of the colony. The colony was soon abandoned in June 1699 but, by then, further ships had been sent out and more left in August of that year. Soon afterwards the Spanish captured the site. Some of the Scottish settled in other lands (Nova Scotia amongst other places) and only a few made it back to Scotland.
The first work of the three in the present volume is a whole heartedly positive, detailed account of the arrival and setting up of the first expedition to Darien. The preparations and departure ‘with a prosperous gale’ from Leith are dealt with quickly. The ‘Port of New St Andrew’ is established and made secure and there follows a topographical description the isthmus, and accounts of the weather, the rich abundance and many types of fruit, the mines, and the method of extracting gold. Almost immediately after arrival a deputation was arranged to meet the Indians and there follows a lengthy chapter on their appearance, customs, and the embassy between the Scots and the Indians.The work concludes with enthusiasm for the future: ‘As we grow stronger, we shall endeavour to procure a part of the South Sea, from whence it's not above 6 weeks Sail to Japan, and some part of China. So that bating distress of weather, by bringing the Commoditys of those Countries over this narrow Isthmus, the Riches of those Kingdoms may in 4 or 5 months time arrive in Europe’, and ‘All these circumstances concurring, makes us hope it will be one of the most thriving colonies in the world, and that all Attempts against it will prove abortive, which ought to be the wish of all the Inhabitants of Great Britain’.
The second work calls on the English to support the Scots in their claim against the Spanish possession of Darien, and the third is an apology for those who left the colony.
Provenance: Francis Thomas de Grey Cowper, 7th Earl Cowper (1834-1905), with armorial Wrest Park bookplate.