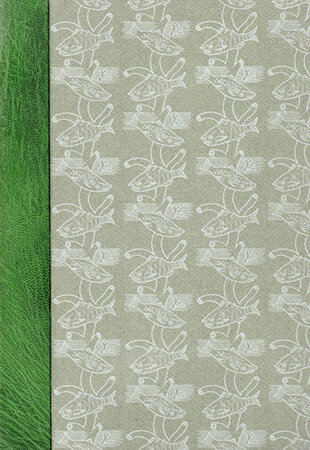 Superbly printed from the original wood blocks, with an extra set of engravings on japon

Taken from the Authorised Version of King James with 13 wood engravings by David Jones. No. xxxi of 100 copies on Barcham Green’s R.W.S hand-made paper, this no. LXII, with an extra suite of the thirteen engravings on japon in a pocket at the back. 4to., an immaculate copy in original quarter green morocco by Sangorski & Sutcliffe, patterned paper covered boards with a fish design by David Jones, in the original green buckram slipcase.

The thirteen engravings were first printed in 1926 at the Golden Cockerel Press, they are superbly reprinted here from the original woodblocks and are much more defined and inked than the original allowing the engravings to glow. Jones’s extraordinary skill and ability to express human turbulence, depth and drama with his modernist images which still echoed medieval woodcut story telling. His page design is splendid and perfectly demonstrates why wood engraving became so important to the fine press movement when text and image could be printed simultaneously.