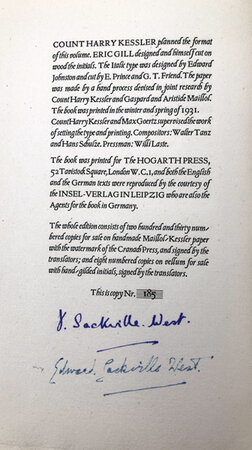 Signed by Vita and Edward Sackville-West, a remarkably bright copy

Weimar printed at the Cranach Press for The Hogarth Press 1931

One of 230 copies, this no. 185 and, unusually, signed by the Sackville-Wests. Wood engraved initials by Eric Gill. Type designed by Edward Johnston and cut by E. Prince and G.T. Friend, paper by Gaspard and Aristide Maillol. Parallel texts in English and German. Pp.134. 8vo., original vellum backed pinkish hued boards, gilt lettering on spine, top edge gilt, others uncut, in the original paper wrappers and card slipcase. An extraordinarily good, as new copy, the best I have seen, with a little wear and darkening to the slipcase and spine of the wrapper.

A fine translation by cousins Vita and Edward Sackville-West of Rilke’s great Elegies which he had begun in 1911-12 at the castle of Duino in Istria and which took him 11 years to finish. He regarded them as the greatest of his works. The Hogarth and Cranach Press collaborated, sometimes argued, over this book but the remarkable production values of Kessler’s Press won out with Johnston’s type, Gill’s wood engraved initials and Maillol’s paper bringing life and beauty to the Sackville-West text.