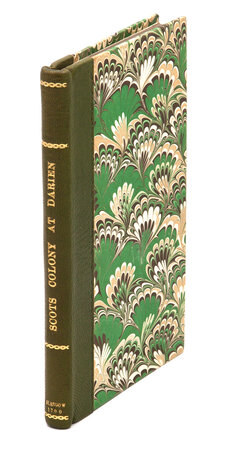 [RIDPATH, George]. ~ An Enquiry into the Causes of the Miscarriage of the Scots Colony at Darien. or an Answer to a Libel entitled A Defence of the Scots Abdicating Darien. Submitted to the consideration of the Good People of England.

One of the most important of the few existing Darien tracts being a detailed explanation of why the Colony failed and a defence of the whole enterprise. A reply to the last pamphlet of the previous item by James Hodges which attacked the ill fated colony. The introduction is a patriotic statement against English treatment of those involved in Darien:
‘The just Horrour that all honest men conceiv’d at the harsh and unneighbourly Treatment of the Scots Colony at Darien, laid the Gentlemen who have been most active aginst it, under a necessity of blackening the Reputation of those concern’d in that Settlement. This they thought necessary in order to prevent any enquiry, that perhaps might be made: Why a Neighbouring Nation untited to the Kingdom of England by Situation, Government, Interest, Religion, Affection and constant Inter-marriages, should be provok’d and trampl’d upon in such a manner, contrary to their own Laws and Original Constitution, and which may pave the way in time for Treating our Neighbours in the same manner.
To prevent any such Enquiry, those Gentlemen that have been pleas’d to signalize themselves as much by their hatred to the Scottish Nation, as the latter have signalized their Valour and Affection, for our common Liberty and Religion, have been at pains and expence to save the Libeller H…s from the Gallows, by putting a stop to his Trial, and filling his Pockets with Money, on condition that he would bespatter the Reputation of the Scots Colony and their Masters. The Crime is indeed unnatural for a man to turn Renegado and a Traitor to his Country; none but a Monser like H…s the Surgeon could have entertain’d such a Thought:…’