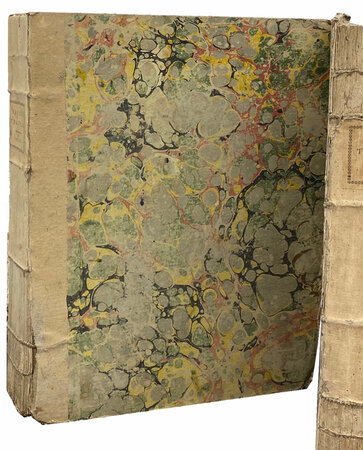 < >
Uncut and in the original boards

An amazing survival being uncut in the original publishers boards.
Born in Stirlingshire, Bruce went to Harrow and then studied Law at Edinburgh University, a degree he never completed. After a brief marriage, Bruce travelled to Spain where he studied Arabic. On his return to England he came to the notice of Lord Halifax who offered him the tricky post of the consulate at Algiers. Since part of his remit was to survey the ancient monuments not delineated by Shaw, Bruce spent some time in Italy before travelling to Algiers in 1763.
Subsequently he made an archaeological tour which prompted his trip in 1768 to Egypt which began the quest narrated in these volumes. In that year he travelled up the Nile as far as Aswan, visiting the ruins at Luxor and Karnak, before sailing down the Red Sea, arriving in Abyssinia in the following year. It was from here that he made his various courageous expeditions to what he considered to be the source of the Blue Nile (it was in fact merely one of its great tributaries).
Whilst in Abyssinia he claims to have been made a district governor (a fact later disputed by Henry Salt) and due to the unstable political climate his life was often in danger. However, by 1773 he was eager to return to England where he felt he would be amply rewarded for his endeavours in Africa. Led by Johnson and Boswell, London Society found Bruce's stories too vivid, and his manner awkward, prompting Fanny Burney to write: ‘Mr. Bruce's grand air, gigantic height, and forbidding brow awed everybody into silence’. Still much of what he wrote was true. Despite the personal recognition of the King, Bruce did not gain the title which he felt should have been his, and sorely disappointed, he retired to his newly enriched Scottish estate, where following the death of his second wife, he dictated this monumental work. He died after falling downstairs and is buried in Larbert.