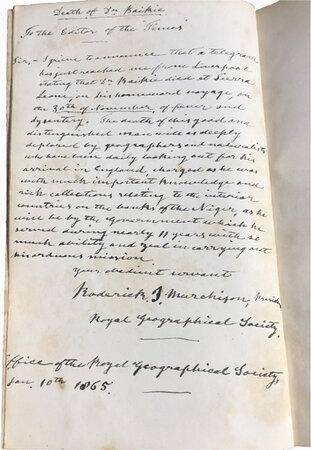 BAIKIE, W.B. ~ Narrative of an Exploring Voyage up the Rivers Kwora and Binue, commonly known as the Niger and Tsadda in 1854.

Born in Orkney, Baikie studied medicine at Edinburgh University. He joined the Royal Navy in 1848 and soon attracted the notice of Sir Roderick Murchison who secured Baikie the post of surgeon and naturalist to the Niger expedition sent by Macgregor Laird in 1854. This is a fascinating association copy with Sir Roderick Murchison's original autograph transcription of Baikie's Times obituary.
A well-written, fascinating narrative. One of Baikie’s most important observations was on the use of quinine to prevent malaria as noone on the expedition contracted the disease. During the expedition the senior officer, Consul Beecroft, died and Baikie took command. Ascending the Benue about 250 miles beyond the point reached by former explorers, his small steamer Pleiad returned and reached the mouth of the Niger, after a voyage of 118 days, without the loss of a single man. Returning to the UK, Baikie gave an excellent account of his work in this book.
In March 1857, Baikie went on another expedition in the Pleiad. After two years exploring the Niger, the navigating vessel was wrecked passing through some of the rapids of the river, and Baikie was unable to keep his party together. Baikie continued to try to fulfil the expedition’s initial premise. He landed, with one or two native followers, at the confluence of the Niger and Benue, and chose Lokoja as the base of his future operations, it being the site of the model farm established by the expedition sent by the British government in 1841, and abandoned within a year of the death of most of the white settlers (see Capt. W. Allen, R.N., and T. R. H. Thomson, M.D., A Narrative of the Expedition...to the River Niger in 1841).
After purchasing the site, and concluding a treaty with the Fula Emir of Nupe, he proceeded to clear the ground, build houses, form enclosures and pave the way for a future city. In less than five years he had opened up the navigation of the Niger, made roads, and established a market to which the native produce was brought for sale and barter. His settlement grew to include representatives of almost all the tribes of West-Central Africa, and more than 2,000 traders visited the town in its first three years. Here he acted not merely as ruler, but also as physician, teacher and priest. He collected vocabularies of nearly fifty African dialects, and translated parts of the Bible and prayer-book into Hausa and Arabic. Once only during his residence had he to employ armed force against the surrounding tribes. While on his way home, on leave of absence, he died at Sierra Leone. There is a plaque to his memory in St. Magnus Cathedral, Orkney.