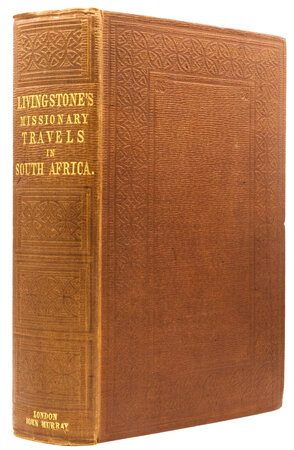 LIVINGSTONE, David. ~ Missionary Travels and Researches in South Africa. Including a Sketch of Sixteen Years' Residence in the Interior of Africa, and a Journey from the Cape of Good Hope to Loanda on the West Coast; Thence across the Continent, down the River Zambesi, to the Eastern Ocean.

First edition, first state, with the lithographs facing pp. 66 and 225 tinted brown and pale green as only in the first state. Folding tinted lithographed frontispiece and 2 tinted lithographed plates by T. Picken, engraved portrait by William Holl after Henry Phillips, 20 wood engravings, folding printed table with wood-engraved illustration, 2 folding lithographed maps by John Arrowsmith with routes coloured by hand in red (one in pocket at rear), and numerous wood-engraved illustrations in the text. Original light brown morocco-grain cloth with covers and spine decoratively stamped in blind and lettered in gilt. Binder’s ticket of Edmonds & Remnants. London on rear pastedown. In a full brown morocco and gilt clamshell box, an extremely good copy with only browning to the first few leaves.

Presentation copy, inscribed by the author on a preliminary blank: “Sir James Watt/with the kind regards of//David Livingstone/London 29 Octr 1857.” It is extremely rare to find a presentation copy of this work, especially this one being signed in the year of publication.Sir James Watt was from the Scottish Borders Watt family and apparently a relative of Livingstone’s great friend and fellow missionary David Gilkinson Watt.
Three states of the first edition have been identified. In the probable first state, the lithographed plates opposite pp. 66 and 225 are tinted brown and pale green respectively; in the second state, the lithograph opposite p. 225 is tinted brown and differs substantially from its counterpart in the first state; and in thethird state, both lithographs have been replaced with black and white engravings.
“Livingstone’s contributions to European knowledge of African geography and ethnography remain virtually unequalled. In three major expeditions (1853-1856, 1858-1864 and 1865-1873), he covered a third of the continent, from the Cape to the Equator and from the Atlantic to the Pacific Oceans, observing and delineating regions previously unknown to white men; he was the first European to explore the Zambesi River, and gave Victoria Falls its present name. Livingstone also brought his powers of observation to bear on the native peoples he encountered, and was inspired by what he saw to entertain not only evangelical notions of their salvation, but political and medican ones as well. He was the first to disclose to the European world the terrible effects of the slave trade upon native populations; the horrors of this ‘running sore of Africa’ moved him to campaign actively for its abolition. He also provided an accurate account of the tsetse fly (Glossina morsitans), along with the disease its bite produced in cattle; at the time the fly’s bite was thought to be (and perhaps was) harmless to man” (Norman Library).