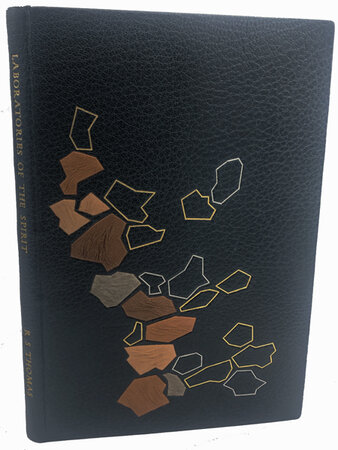 < >
One of only 15 specially bound copies on Batchelor paper, signed by the poet and bound by one of the most important 20th century binders in Britain

Newtown Gwasg Gregynog for the University of Wales Press 1976

No. XI of only 15 special copies printed on Batchelor handmade paper, signed by the author and specially bound. Printed in brown, blue and black in 16 point Original Janson type on the Albion Press at Gregynog by Michael Hutchins. Thin 4to., bound by Sally Lou Smith, signed on the lower turn-in, in blue French levant goatskin with brown, chestnut, tan and grey puckered morocco onlays on upper and lower covers tooled in gold, palladium and blind and lettered in gilt on the spine, endpapers by noted papermaker John Mason from plant-material gathered at Gregynog. Housed in the original quater blue goatskin drop-back box with oatmeal cloth sides, felt-lined and titled in gilt on the spine. An extremely good copy.

The first book to be printed at the revived Gregynog Press in 1976. Sixty of R.S. Thomas’s remarkable spiritual Welsh poems appears at their best in this printing: “Life is not hurrying on to a receding future, nor hankering after an imagined past” or “There is a stillness about certain Ming vases which in itself is a form of prayer....there are moments in a Bach fugue when we are at the centre of the universe and hear the throb of the great dynamo that converts music to power”.
The important designer binder, the American Sally Lou Smith, embraced the book entirely using just the right colours and design to complement the earthy beauty of the poetry and typography.