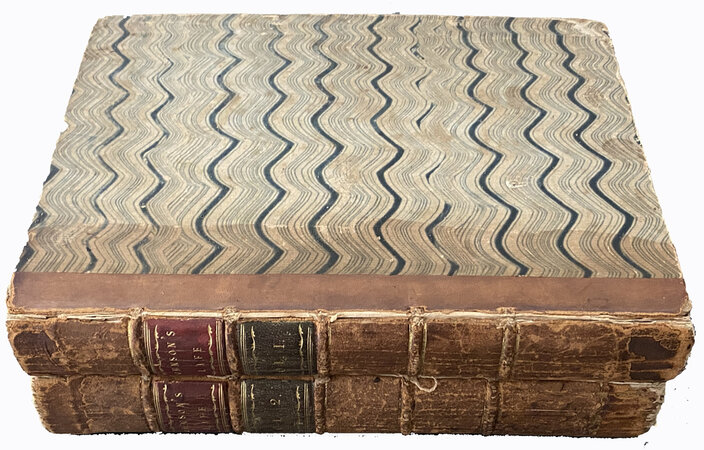 First edition, first state, with ‘gve’ on p.135 of the first volume; Mm4 and Nn1 in Volume I and E3, Qq3, and Eee2 in Volume II are cancels. 4to (203 x 295 mm; untrimmed), engraved portrait of Johnson by James Heath after Sir Joshua Reynolds (browned), 2 engraved plates of facsimiles by H. Shepherd. An extraordinary copy in contemporary half calf and the original publisher’s boards and with the edges of the paper all uncut to the extent that it is an exceptional tall copy, almost a large paper copy, morocco spine labels. Hinges cracked, scattered foxing, a few trifling stains, boards somewhat worn and fragile, preserved in a brown cloth chemise and half morocco slipcase. Booklabels of W. Strong (1p. ALS from J. Parsons to him laid in) and ink signature of J. Robinson in Volume I. Accompanied by The London Chronicle, No. 5414, for May 5, 1791, which prints an advertisement for the book.

W. Strong is addressed in the letter as Rev.d Archdeacon Strong – he has used the blank page of the letter to make notes on volume II of the book and has added some notes on the front pastedown and on another small sheet which is inserted loose.
‘Boswell's Life of Johnson is one of the best books in the world. It is assuredly a great, very great work. Homer is not more decidedly the first of Heroic Poets, - Shakespeare is not more decidedly the first of Orators, than Boswell is the first of Biographers. We are not sure that there is in the whole history of the human intellect so singular a phenomenon as this book. Many of the greatest men that ever lived have written biography; Boswell was one of the smallest men that ever lived, and he has beaten them all’ (Macaulay, in the Edinburgh Review, 1831, ap. Allibone).
W. Jackson Bate, Johnson's best modern biographer, assessed Boswell's achievement in this way: ‘It was to be a new kind of biography - a life in Scenes, as though it were a kind of drama. And when this life in Scenes did appear, nothing comparable to it had existed. Nor has anything comparable been written since, because that special union of talents, opportunities, and subject matter has never been duplicated. If there were writers who had Boswell's opportunities of knowing their subject as well, they have not had his unusual combination of talents. If they had his talents, they have lacked his opportunities. The talents include his gift for empathy and dramatic imitation, his ability to draw people out and get them to talk freely, his astonishing memory for conversations, his zest and gusto, his generous capacity for admiration, and his sheer industry as a reporter - qualities that are by no means often found together. Whatever its limitations, the work remains unique among all writings by one human being about another in the drama, fidelity, and range of interests in the conversation of one of the most fascinating individuals in history, Samuel Johnson’ (N. Y.: Harcourt Brace, 1977), pp. 365-366.
Adam 2:37. Courtney 172-173. Grolier English 65. Pottle 79. Rothschild 463-465.