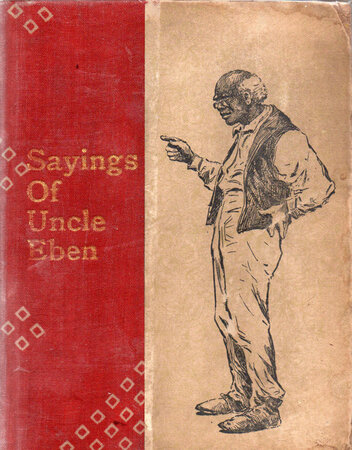 26 illustrations by Will Chandlee including one full length portrait of Uncle Eben printed in brown which is repeated on the upper cover. Seen through the Presses by Will A. Page at his printing shop, no. 937 Washington, District of Columbia. Title printed in red and black. Pp. 88 12mo., original red patterned cloth backed printed paper covered boards, lettering in gilt on upper cover. Some mild dampstaining to the edges of the paper covered boards, rubbing and one gathering slightly starting but still a good, strong untrimmed copy.

A rather charmingly rustic printing and binding, with amateur inking and rather off kilter printing of the red letters on the title page.
Many of the ‘sayings’ originally appeared in the Washington Evening Star with Johnson’s take on African American Vernacular English. Johnson was a long time staff member at the Star and was also a noted lyricist and poet. He was a humourist and is famous for his quotes ‘Cheer up, the worst is yet to come’ and ‘Politics is the art of turning influence into affluence’.
There are pencil markings by some of the sayings including ‘Doan lose sight er de future. De one dat grabs for de bigges’ piece er watahmillion am liable ter git lef’ out de nex’ time invitations is issued’, the eyebrow raising “Some dogs is like human fo’ks. Jes ‘ez soon ez yoh gib ‘em ‘nuff ter eat, dey ‘gins ter git sassy” and ‘Some white people seems ter regyahd dehse’ves ez bein’ so much better’n de res’ of de worl’ dat dey doan’ hab to show no superiority in dar actions’.
There is an ‘interesting’ view on votes for women ‘Ef women am ez contrary ez some folks ‘clah dey is, de bes’ way ter git em outer wantin’ suffrage, am ter tell ‘em day got ter vote’.