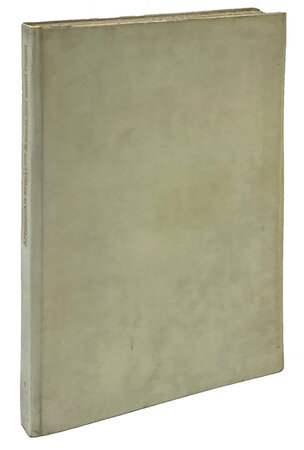 < >
A tour in America to promote the National Trust, leading to the formation of the US version in Washington

London printed at the Essex House Press in Bow, published by Edward Arnold and Samuel Buckley in New York 1901

No. 143 of 300 copies. With decorative initial and Press device printed in red and 8 woodcut decorated initials printed in black, contents page printed in red and black. Printed in Endeavour type. 8vo., original full vellum with yapp edges, spine lettered in gilt, untrimmed. Some slight marking to the vellum but a very good, bright and clean copy. Errata slip tipped in.

With the decorative booklabel of R.T. Gibbon and one of the noted collector John Lewis. Ashbee served on the council of the National Trust between 1896 and 1901 and the eight addresses printed here are from a journey he made on behalf of the National Trust to highlight its aims and work in the United States. It is clear he had a great mastery of words and a passionate belief in the work of the Trust. In fact, the trip led to the formation of The National Trust for places of Historic Interest & Natural Beauty in Washington.
The eight addresses are On the Purpose of the National Trust; The Abbeys of England in the Light of a Lesson in Citizenship; The Country Houses of England and the Sentiment of Elizabethan Aristocrary; The Abbey of Westminster, the Greatest of National Trusts; Chelsea: or the Village of Palaces; Ethics in Citzenship: an Address Given before the Cincinatti Conferences of Art and Literature; The National Trust to the Great Vainglorious City of Chicago; On Certain Aspects of English Apathy.