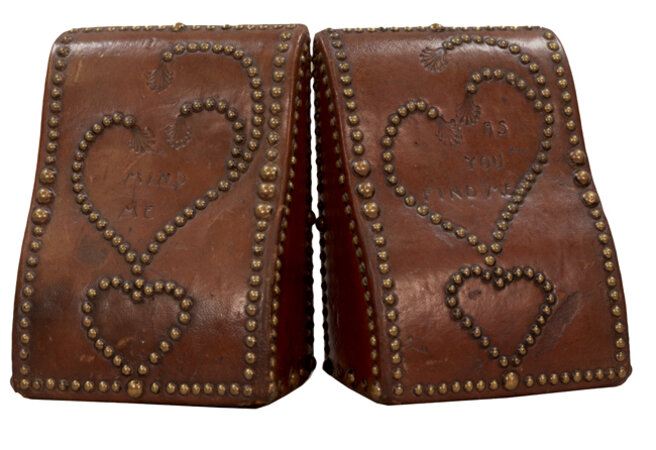 Two brown calf bookends with a design of decorative brass studs and with tooling in blind of flowers and the gouged words ‘Mind Me’ and ‘As You Find Me’, so typical of Birkenruth’s style, worked into the leather in blind, border in blind on the smooth inside edges. Each signed with a stamp on the inside in blind ‘Johanna Birkenruth London’. Each 144 x 135 x 70 mms. Some occasional rubbing with a little wear to the very top of the back and the base of one bookend and the base.

Johanna Birkenruth (1853-1929), began binding around 1888 and was a fascinating example of an enterprising, independent woman of the time who made a living out of her work. Her work was much admired and one of her bindings was displayed at the 1897 Arts & Crafts Exhibition which was so instrumental in inspiring Frank Karslake to set up the Guild of Women-Binders with which she was associated, although she never became one of their number. Birkenruth was a highly independent and successful woman with her own unique binding style, being well known for her embroidered bindings, a couple of jewelled bindings as well as her gouged designs and innovative techniques.
She is said to have been the first woman to have given formal lessons in bookbinding from her workshop on at no.89 Cromwell Road in London - her advertisements in The Studio which appeared around 1897 market these classes as well as her handmade leather items including these bookends and cases, caskets and boxes for lace and fans.