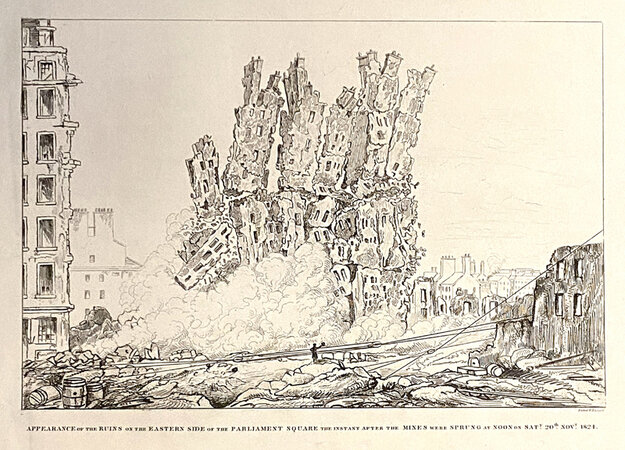 < >
The Great Fire of Edinburgh, 1824 which started in a printer’s shop - a rare visual record and a presentation copy from the artist

HALL, James, artist. LIZARS, William Home, etcher. ~ Eight Engravings of the Ruins occasioned by the Great Fires in Edinburgh on the 15th, 16th and 17th November 1824.

Edinburgh published for the Benefit of the Sufferers and sold by A. Constable & Co 1824

8 etched and lithographed plates, after drawings by Sir James Hall. Oblong folio., [296 x 475 mm], unbound with the original wrappers with the engraved title, the remains of the green glazed paper spine, edges untrimmed. The plates and the engraved title are in very good condition. Inscribed on the title in ink ‘To Colonel Wilkes with Mr James Hall’s Compliments.

The Great Fire of Edinburgh 1824 began in a printer’s shop in the High Street and burned for 4 days. It killed 13 and destroyed around 400 homes. The Fire Brigade in Edinburgh had only just been formed by James Braidwood so it was inadequately trained and equipped.

Sir James Hall, who gave this copy to Colonel Wilkes was the original artist of the plates, and Lizars worked from his drawings. (Lizars had documented his method of in his 1820 work “Account of a New Style of Engraving in Copper in Alto-Relievo”). The copy in Edinburgh Uni. Library was also given by Hall to a different recipient.