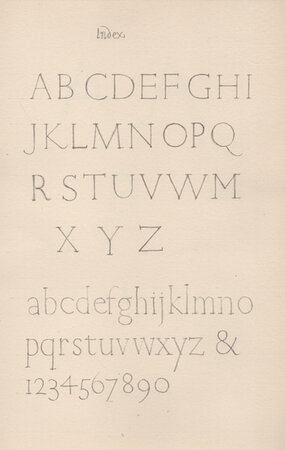 < >
With an extra facsimile of the Gill alphabet book in a separate portfolio, one of only 50 copies

Foreword by Douglas Cleverdon and an introduction by John Dreyfus. No. 26 of 50 special copies, bound by Clare Skelton and signed by Douglas Cleverdon. 27 pp. of finely produced facsimile printed on rectos only of the Book of Alphabets, this special copy with an extra set of the facsimile pages loose in a portofolio. 8vo., bound by Clare Skelton in black morocco backed colourful patterned paper covered boards, the extra facsimle in a black cloth portfolio, both housed in the original red cloth slipcase. A fine copy.

Gill produced this book of alphabets for Cleverdon in 1926 when he was staying in Bristol with Desmond Chute with the purpose Cleverdon in his new bookshop in Bristol to paint the signboard he had designed for Cleverdon. The afternoon of his visit Gill came down with flu and Cleverdon suggested that to while away the time while he was in bed he might like to delineate a couple of alphabets in roman and sans-serif which he could use in the bookshop. Gill drew them in a Nonesuch Blank Book over two days and left them with Cleverdon.
Stanley Morison visited five months later and inspired by the book and the signboard which inspired him to commission a sans-serif for Monotype which was to become Gill Sans.