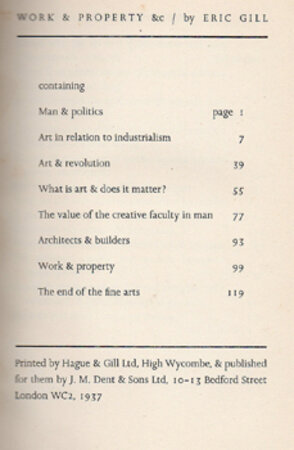 < >
From the library of Gill’s friend and collaborator in Jerusalem, the architect Austen St Barbe Harrison

Eight essays by Eric Gill including ‘Architects & Builders’ with the booklabel of the noted architect Austen St Barbe Harrision, engraved by Eric Gill and of David Potter, engraved by Reynolds Stone.
The noted architect Harrison spent a great deal of his working life in Jerusalem and it was there he collaborated with Eric Gill in building the Rockefeller Museum where 10 bas-reliefs by Gill can be seen in the inner courtyard (see also From a Jerusalem Diary published in 1952 which shows Gill’s work for the museum).