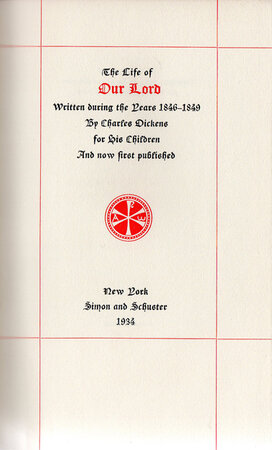 MERRYMOUNT PRESS. UPDIKE, D.B. DICKENS, Charles. ~ The Life of Our Lord; written during the years 1846-1849. By Charles Dickens for his children and now first published.

Written around the time he was completing ‘David Copperfield’, Dickens wrote this extended letter – a simple account of the life of Jesus – to his children, but refused to permit publication of it during his lifetime. Dickens referred to this work in a letter to John M. Makeham, who had accused him of irreverence in a passage of ‘The Mystery of Edwin Drood’.