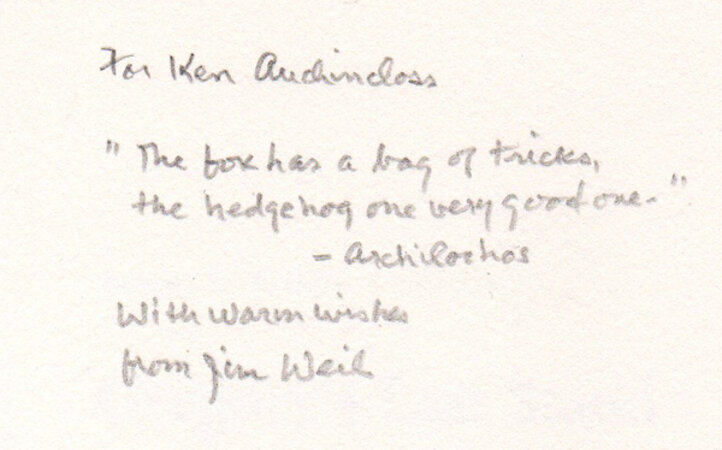 < >
A collection of 4 Kelly-Winterton Press poetry books by James Weil, each one inscribed by the author to Kenneth Auchincloss

KELLY-WINTERTON PRESS. WEIL, James L. ~ Something Given; Bill's Shaker Chair; Washday, and Others; Gregory's Last Stand and Other Lasts.

Second printing of ‘Something Given’, the other 3 titles each one of 176 copies. Designed by Jerry Kelly and printed at the Stinehour Press & by Michael & Winifred Bixler in Bembo type. 4 volumes 8vo., original paper wrappers. Fine copies.

Each volume warmly inscribed by Jim L. Weil to Ken Auchincloss on the ffeps or limitation page.
With original order forms loosely inserted in the latter 3 volumes.
James Weil (1929-2006) was a distinguished American poet and publisher. Having been a businessman, in the 1960s he founded the Elizabeth Press which becaem one of the most important publishers of 1960s and 1970s American poetry. He later published his and otehr work under the James L. Weil imprint useing the Officina Bodoni and latter the Kelly-Winterton Presses to design and print the books.