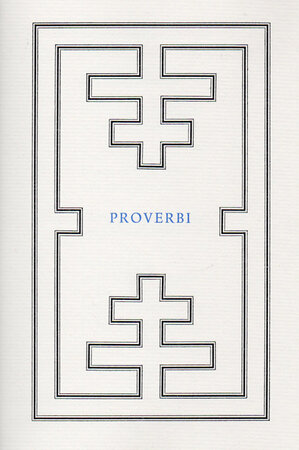 No. 125 of 150 copies. Poems in the original Italian, edited and with a postscript by Ada Ronzini. Variants of the ornamental title page border recur on the three part titles, which are printed in green, blue and red as are certain displayed letters, lines and musical staves. Set in Zeno and Dante types and printed on Magnani mould-made paper. Pp. [4] 126 [6]. 8vo., original tan buffalo leather over brown paper patterned boards with gilt borders, red morocco title label lettered in gilt to spine, t.e.g, others uncut. Housed in the original tan cloth slipcase. Slight fading to the spine and rubbing to the slipcase, otherwise a handsome copy with the original prospectus inserted loose.

The Italian poet Ser Garzo dall’Incisa, is a mystery. Opinion is divided as to his actual identity, though one fairly plausible explanation is that he was the great-grandfather of Petrarch. This edition brings together his collected writings for the first time: the ‘Proverbs’, the ‘Leggenda di Santa Caterina’ and the ‘Laude’. The ‘Laude’ were often sung in church and their melodies have been preserved in several manuscripts. In recognition of this, the first two verses of the hymn ‘Altissima luce’ have been printed in red and black with a melody taken from the Codez Cortonese.