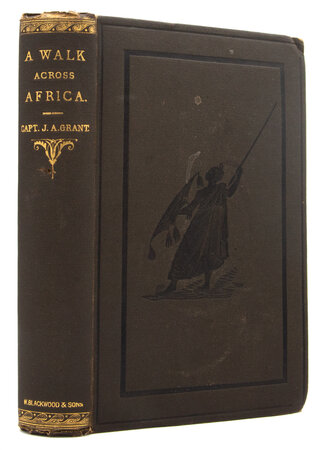 < >
Botany and the search for the source of the Nile

GRANT, James Augustus. ~ A Walk Across Africa, or Domestic Scenes from my Nile Journal.

In 1846 Grant obtained a commission in the 8th native Bengal infantry and during his time in India he met John Hanning Speke, they became friends and hunted tigers together. In 1859, Speke invited him to join an expedition to confirm that Lake Victoria was the source of the Nile, a fact he had been unable to conclusively establish on his expedition with Burton the preceeding year.
Grant travelled with Speke from Zanzibar to Cairo. The two were often separated and, in those instances, Grant had command of his section of the column. He collected some seven hundred species of plants along the way, eighty of which were unknown to the scientific establishment. This work is intended as a companion volume to Speke's and, in addition to the botanical discoveries, includes much information on the tribes they encountered. Grant received the Royal Geographical Society's gold medal on his return in 1864.